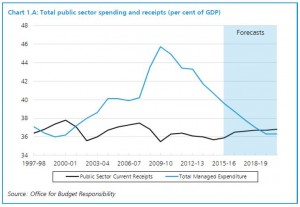 This graphic is from the Government’s newly announced CSR paper for this November.

We are now at a 2004 level of spending but with slightly lower income. We should be concentrating on raising that income, but the basic point is that our deficit has gone from being at ‘crash’ levels to ‘New Labour’ levels. We are unarguably now at a stage where the social sphere’s share of economic activity is below that of 2004 – indeed, in real terms we crossed that line some time ago – our population is growing.

If public opinion is not prepared to defend those things now but was in 2004, yes we can adapt to that, or challenge it. But first we should be asking if such a political shift has occurred, why, and what we would want to come out of it.

I am disappointed that there is no Labour leadership candidate from the left flank of the party (or even its centre) who is interest in cutting edge analysis and in particular the science of public discourse and opinion.

In my view a materialist left needs to be real enough to engage in questions like this bravely. If we are witnessing this kind of shift, we are certainly seeing one wing of the Labour Party arguing to adapt to that trend and concede to what is essentially a second wave of rightward shifting after the neoliberal revolution of the 1980s. The argument is that we may be defeated forever, but we should see any small adaptations we can make as validating that defeat to the point where we can tell ourselves it is victory. In short, a Dunkirk strategy. But one in which you keep on making the retreat whilst the enemy keeps chasing.

In Blairism, there is no looking beyond a permanent rightward shift. And in jettisoning all concern for the most basic amelioration (i.e. countering child poverty), they can no longer even argue that the most moderate sweetener is there to help the ‘deal’ go down.

In contrast, the left alternately argues that such a rightward shift does not exist, or that it should be countered. It cannot keep its line straight between these two antagonistic arguments, because it is not interested in doing the groundwork to actually find out in the first place. In this sense, there is little reason it should be taken credibly.

The third approach, and what is not being argued, is that the shift exists, should be acknowledged, and that we need to think of imaginative strategies and indeed tactics explicitly to halt or reverse it.

It is increasingly unclear if the ‘hard’ flanks of the party feel they have anything at all in common with each other. Both seem to take this as a badge of pride, which I feel is immature and makes us phenomenally weak against a party which represents all wings of the establishment and shares a common outlook and basis of consent at a very basic level.

Indeed, many on the left fear that such a shared ultimate objective as halting a rightward shift does not exist across the Labour Party (in the way that commitments to things like low taxes for well off people appeal across the whole spectrum of the Conservative Party).

Which is an obstacle for us all. In any event, I would argue that the challenge for the right of the Labour party is to commit to this objective, and to be trusted to do so. Fundamentally this is why Blairites are currently unable to appeal beyond their core. They need to revise.

The challenge for the party left is to commit to being honest with itself, doing some actual original and non-repetitive things in pursuance of changing public opinion, and working with others to make it happen. It needs a good revising too.

Innovation and radicalism in defence of core values (rather than led by George Osborne) is ground that everyone in Labour can stretch to stand on, and it is ground which can win support from both our left and right flanks – the only way to win any future election. It is probably also the only way to hold Labour together and secure any common currency as a movement, even if winning proves to be totally impossible.

Rather than seeing this happen, I suspect I’ll just sit and get pissed off with the TV instead. La lotta continua, and all that.