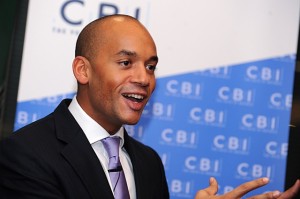 Sensible socialists often have to compromise with or even harness capitalism. Yet unlike Chuka Umunna, I am not happy to call myself a capitalist.

I neither believe in nor benefit from supporting the class system. Which however much we bang on about ‘mobility’, remains what capitalism is. Some people can only aspire to become wealth creators. A smaller number of other people get to be their bosses. And so are born Two Nations.

I’m not even sure that’s what Chuka Umunna was agreeing with when he said we are all capitalists, which is part of what makes his throwaway comments highly questionable if you remove the context. So I think that’s what I’ll do. After all, it is funny how in British politics the slightly left-of-centre are often so happy to use ‘capitalism’ to mean ‘everything I like about capitalism’. But what does it really mean?

Capitalism is now an international system based on centralised control of wealth (capital) and political power by an economic class. Ugly stuff.

To sustain itself, it normally has some element of democratic management or involvement built into it as a pressure valve. If that hadn’t evolved, it would have been history by 1860.

In states where elite tolerance with a well supported and confident left has worn thin (think South America, civil war Spain, the Weimar Republic or South Africa) events have shown that this doesn’t always ring true. Capitalism and democracy are far from the same thing.

At a more fundamental level, the whole thing is built on the idea of people signing away or being forced out of the right to make their own decisions for 8-12 hours a day, and feeling vulnerable enough to do it.

Things in our world change fast, and it often doesn’t take much time for what seems normal to seem weird – “all that is solid melts into air”.

It comes with convulsions, booms, busts, threats, wars and a tide of other horrors. Consider how people must have felt during feudalism, or mass slavery, and how ridiculous it would have been to them to imagine the world we live in now.

I would not argue that profit or competition are always wrong. What they are used for is important. But who is in charge of the economy and how it is influenced both control that.

The idea of a softly steered capitalism that is relatively democratic and delivers for those who work within it belongs in the Crosland era – the late 1950s and the 60s – a period which followed capitalism destroying all the wealth it had built up, along with millions of people, and a social revolution which followed. It was also exclusively western, and doesn’t reflect the experience of those in Africa, Asia and South America, for whom capitalism has actually usually meant war or long standing police states.

Liberal capitalism itself has a list of atrocities at least as long as its far more forthright Stalinist and Fascist cousins. Liberals and conservatives in Europe and the US love to pretend that Pinochet, who they politically and economically supported, is completely distant from them. But even as we speak, those people have plans to cream off money from thousands of Chinese sweatshop workers, and will defend this on the basis that we get the vote and the right to strike in MEDCs.

Workers in the west have also taken a beating to keep the white goods cheap. For a start the jobs they had are now in China. But that’s to do with the political defeat of their own parties and movements.

Yet I am an optimist. Even after globalisation, in my own view there is hope to be found of reforming capitalism back, and re-extending social power over greed and irresponsibility. It won’t be done by Parliaments acting without pressure from outside, and unlike the last time social democracy advanced, this time it won’t be done by single states acting on their own. But most people on the left understand this.

So if we would like capitalism to be more restricted by the public interest, I question how the left can reform back something that is regressive by declaring faith in it.

Whether your system is a ‘workers capitalism’ like Venezuela, welfarism like the 50s (or Sweden), or outright fascism, the same themes of concentrated wealth and power with those who own stakes in companies continues to perpetuate. And that part of any political settlement is never about working for the wider social good.

Yes, in the immediate term we need to make capitalism work better – to tame it, stabilise it, diffuse its proceeds, and diffuse power over it. In this sense, Stewart Wood, Ed Miliband et al are dead on. What is even more rare is that what they want is both better for short-term competition, and for people who have to work for a living. A win-win.

But it’s not so much that everyone is a capitalist now.

It’s more that we need to be honest about how much of a hold it has on our culture and our economy, how poorly organised the left is, and how difficult this can make it to flog people anything that looks marginal, impossible, or completely alien to their existing belief system.

Slamming capitalism is politically irrelevant at best. But pledging allegiance to it is self-defeating and naive about what the class power of the well monied actually means.

What we need to do is concentrate on is resisting the worst of it, on changing wider political culture, and organising the insecure majority of people against all that is wrong with capitalism – whatever they want to call themselves.

The economic crisis from 2008-2012 having become a crisis of both finance and working class living standards, we continue to be in a ‘war of position‘, as has been true in developed economies since the late 1970s.

I have developed a political tolerance for capitalism, because it’s better to build ourselves something constructive rather than getting pasted in newspapers every day without changing anyone’s minds. I feel OK about that.

All of this said, I’d rather just be honest. It’s ridiculous to have a moral belief in capitalism – not least as a self-described socialist.

Capitalism has no moral desires of its own to believe in.

When we support the morality of capitalism, there are only those fleeting ethics of the social group who organise its diary. In other words, those in charge of the businesses, and the political structures beneath them.

To believe in capitalism is to believe that a small number of highly advantaged people should be left alone to make the bulk of the decisions.

The labour movement might have to tolerate or employ this economic system to its own ends, but why should it actively promote it in its own ranks?

In the immediate future it’s good for Labour to concentrate on building a private sector which is more sustainable and enduring, and democratic enough to give away more of its proceeds. Nobody is opposing that.

But what about the principle? The big question?

It will almost certainly never happen in our lifetimes, but wouldn’t it be great to see capitalism superseded by a stage of history which is more democratic, international, and more focused on serving the bulk of people who aren’t already sorted?

We could call that democratic socialism, and we could call the bits on the way social democracy. We could even put it on the back of Labour membership cards.

I’m sad that HMV has gone under and will result in job losses. I’m sad to lose the doggy logo as well.

Workers and redundant modes of production

But here’s he thing. As socialists, why have we gone for over one hundred years without tackling what we do about models of production, distribution and exchange which are technologically and organisationally out of date?

In capitalism this leads to flawed business models. That’s bad, though some on the left may seek to write this off (don’t even try it if you hold a candle for China though). But even under socialism, models expire. Socialists need an undercutting approach to how this should be dealt with that go beyond reflexive reaction. Because in socialism, when we fail to advance how parts of social and economic life are organised, we don’t just betray shareholders.

What I’m saying is that we should mourn for employees and possibly a bit of commodified nostalgia – but why mourn for HMV itself?

An advance to mail order is probably a welcome division of labour, and better for customers – it would be even more welcome if the state could get these people using Royal Mail.

The second and more important thing to say though, is this. HMV was losing out to superior models. But in reality, how superior are they?

You see, this wasn’t a fair test. And actually, it seldom is. Capitalism is an arena of competition which imprecisely overlaps an arena of political power, existing economic power, and imprecise dimensions of human behaviour including location and identity. It’s messy. Especially in conditions like our current artificially prolonged stagnation. Stuff goes wrong all the time.

How? Well, have a peek at this.

“All that is solid melts into air” indeed. If I owned a retailer, I would be getting pretty annoyed with some of my fellow owners right now.

So, where now, workers and bosses?