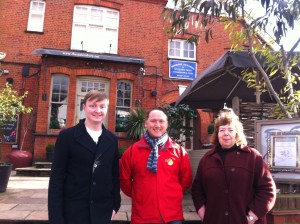 I and my Labour colleagues campaigning in Willesden Green ward, Bernard Collier and Cllr Lesley Jones, are strongly opposing the demolition of a local pub, the Queensbury. You can find out more about the campaign to save it here.

Let’s face it folks. If I’m objecting to the demolition of a Conservative Club, I must have a good reason!

My formal objection to the proposals is below.

I oppose the demolition of the current building and plans to replace it for the following reasons:

1) This is an Asset of Community Value which warrants protection. The pub is used by local community organisations that have no alternative venue.

2) It currently houses one of the safest and most welcoming pubs in the area and is a positive draw. It raises the socio-economic profile of the area. There is a continuing risk that the developer will downgrade from A4 to A3 use and we end up with yet another coffee shop, knocking out the local balance in the area.

3) The building that stands is a local landmark, and a positive one.

4) The current building is in fitting with surrounding styles, whereas that proposed is not, and is furthermore out of fitting with the adjacent Mapesbury Conservation Area.

5) The car parking area behind the present building provides plenty of room for housing – us of the whole site is not necessary either commercially or socially.

6) In my view, there is not sufficient social or affordable housing within the proposed development. This makes arguments around provision of housing need far less valid, as does the refusal to build in the car park but allow the pub to stand.

7) The development is too high for the local area.

8) The Willesden area including both the High Road and Walm Lane are undergoing some degree of private sector led regeneration. But constructing flats over the site of a key local pull factor for young professionals actually represents a backward move from this  trend rather than a forward one.

I believe that the loss of local amenity will actually impede efforts to diversify the tenancy profile in the area and create a more mixed profile. This will mean the denial of economic benefits in the area in terms of both new tenants and also to the surrounding food establishments and shops, and as a whole will have a negative economic impact for the area, whereas the main positive impact will be to the developers.

The development is a backwards step and is actively anti-social, in this respect.

8) There is a general negative trend of the removal of social spaces in our society. The closure of pubs nationwide is part of this negative trend, of which these plans are an example. Councillors should pay attention to the social as well as purely economic impacts when deciding to allow demolition of institutions such as these.

The decision to replace a rare local example of a well kept pub with the plans considered means a development that is out of place for our area, has a negative impact in both a social and economic sense, damages local identity, counters regeneration by making it unbalanced, and removes a vital asset from the local community.

This is my objection in full, thank you for taking the time to read it.