SNP – a party that attacks from the left

There are countless examples of right-wing policies which emerge from the SNP, some intentional (such as cutting corporation tax), some not (such as destroying their own revenue-raising capacity with full fiscal autonomy – a sure precursor of massive cuts).

Whilst this is the fact of how they administrate and would plan to govern, it is certainly not true of their form. There is a big difference between how they look and what they are, which is in itself a big part of how they have achieved political success, adding enough former Labour voters, particularly in working class areas, to their own bloc to win. It is also how they have built their support base of activists so heavily. Their attacks are always rooted in a logic of the left.

Of course, I don’t mean to say that all they have done is make successful attacks on Labour from the left. Another key part of the potency is the joining of ideas around community, region and nation to those they have pinched from social democracy and the wider left. Anti-austerity. Welfarism. Environmentalism.

The Yes campaign in itself was a wonderful example of this ‘centre-left nationalism’ strategy being successfully carried out, resulting in a massive boost for the Yes vote against what was expected, and the circumstances which preceded the electoral wipe out of Labour.

There are a lot of voices in the Labour Party however who would like to deny that ‘left appeal’ plays a major part in the SNPs hegemonic strategy in Scotland. They are not without a point in terms of the substance which flows through the Parliament, but the reason the argument is made is so that pressure to move to the left can be ignored, in the face of some pretty good evidence, and the fact that we would need a 12.5% lead to beat the Tories in England and Wales alone.

This is not to say that Labour critics of the SNP’s policies are without grounding. This graph illustrates the gap between left-nat rhetoric and the substance pretty well: 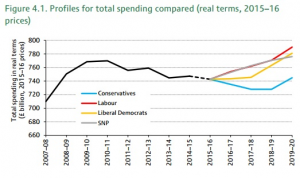 Further to that, we all know that Scottish Labour has its own deep cultural and organisation problems, before we get onto the politics (though I would argue that separating these notions is artificial).

But these points do ignore how the SNP and the wider nationalist bloc campaign and present themselves – or which of Labour’s vulnerabilities among Scottish voters the nats choose to target.

On 28 September 2015 the new Shadow Chancellor John McDonnell, previous chair of the LRC and probably the most left wing MP going, made a measured socialist speech laying out Labour’s new more straightforward, less compromised anti-austerity programme. This could be considered a move away from Ed Miliband’s approach, which still (despite SNP rhetoric) offered a large overall increase in public spending, in a much more stealthy and often slightly muddled way. The trailing is certainly of interest!

Just look at how Stuart Hosie of the SNP responded to McDonnell’s speech:

“Mr McDonnell’s comments confirm that when it comes to Scotland Labour haven’t changed. Rather than learning from their mistakes and setting out a positive vision for the country, they are repeating the same negative and ill-informed rhetoric that saw them all but wiped out in Scotland at the last election. They may have changed the messengers but it’s the same tired old message.

“Labour’s economic plans are all over the place. While the SNP went into May’s election opposing austerity and campaigning for a real terms increase in public spending, Labour ran scared of the Tories and backed their draconian cuts and welfare reforms.

“While the SNP remain firmly opposed to George Osborne’s pro-austerity fiscal charter, John McDonnell just last week mandated Labour MPs to troop through the lobbies with the Tories yet again to back the plans, just as they did when they voted for £30bn of cuts in the last parliament. Labour have now lost all credibility and no one will take these claims remotely seriously.”

I would argue that there is much to debate about the state of Scottish Labour, but the content of this attack tells us all we need to know about the SNP’s strategy, and consequently, the political basis of our own weakness.

Scottish Labour’s and indeed the CPGB’s most successful days in Scotland joined the distinctiveness of the Scottish nation and its local regions (place) to an uncompromisingly left identity, image and story (purpose). That’s exactly what the SNP are doing in a positive sense now, and it’s reflected in the weak spots they choose to attack in Scottish Labour.