Both have much wider support of significant sections of the public than they did before 2010, which is interesting, because Labour before 2008 was largely pretty fiscally conservative.

In England and Scotland respectively, each lie has gained significant currency and is playing a large role in the General election. This has been the case for some time – a situation which a hostile media has done as much to stop Labour from rectifying, in both cases, as far as possible.

1) The first lie is that Labour caused the deficit between spending and tax income.

2) The second lie is that Labour are the same as the Tories, or near indistinguishable – whether on austerity, or the rest of its platform.

Interestingly, this point was made about Labour by its own left when Blair was in office – with some basis. Overlapping with Tory policies, messages and ideological frames was key to New Labour’s triangulation strategy, and its fingerprints are still all over public policy.

But the charge hadn’t stuck with the public, and more specifically the public in Scotland. There was some travel between 2006/7 and now, but the acceptance of this argument has been greater since 2010 and against since the independence referendum, despite the parties becoming considerably further apart. The correlation in Scotland has been much more with the organising and building of a far left driven & nationalist led campaign around the concept than it has been with the policies on offer. In turn, it has led to a massive swell in support for an SNP which is only significantly left of Labour on the issue of nuclear weapons.

The lie itself takes the form of an audacious and deliberate exaggeration. It is often made (sometimes even by Labour members stuck in 2003) by those who think it will somehow push the party leftwards if it gains wide acceptance, as if their rhetoric is somehow abstractly mirrored in how the party is politically composed.

The lie needs far more attention from the Labour left. Its repetition by Labour’s opponents on the left does nothing to help the left within the party – it actively impedes us.

Attempts to provide a safe space for, and then actually road test a social democratic platform against the Tory government, are effectively under attack from this particular opportunistic slander.

And yet, it also has negative effects on political outcomes in the ‘real’ world.

It actively demotivates people from voting the Tories out or Labour in. I would never argue that this is a price worth paying, but it is certainly easier to set aside if Labour has a majority of 120, has little democratic mechanism to evolve its makeup or thinking, and actually is quite close to Tory policy positions.

However, we are not in such a fortuitous situation. We lost heavily in 2010 and were lucky not to get a Tory majority.

For the people we represent, particularly in more fragile communities, we cannot now politically afford to give up 15 seats to the right so we can deliver ‘pure’ policies.

Instead we need to show that the ‘left’ policies we do now have are capable of winning mainstream support, and should be built upon.

The conditions of a global drive to austerity make a far more imperative that a Labour government is elected and that conversations over what strategy it should adopt are forced upon both Labour and the wider movement.

The lie cuts against both of these imperatives. The lie of ‘all the same’ is in part about making sure that such course of action is not adopted – so it is not just actively hostile both to Labour, and also the left within Labour. We have a left outside it that has moved beyond an uneasy relationship to a successful electoralist stance which is directly sectarian.

Its advocates claim that this is not true, but one only needs to quickly review who its advocates actually are before understanding where their incentives lie.

Under present conditions, resisting this lie is now strategically important to the Labour left as well as factually correct – so resist we must.

I am not saying we should never work with the SNP or indeed the Greens. But that is a very separate argument to how we campaign for elections.

Lying down and adopting a conciliatory approach whilst our left opponents hammer our ability to shift the country leftwards will not do. Nor will arguing from the right, given that their efforts in Scotland are yielding such effective results. Indeed, there is not time to make any change which can talk these voters round. Our responsibility now is to salvage what we can, and lay a solid and clearly left basis for Labour to renew in Scotland as a distinct, vibrant and democratic movement as well as an electoral party.

The crux of the matter

Labour’s own big obstacle to correcting both perceptions remains in place.

A negative legacy of the Blair years that every Labour opponent is trusted more than Labour, even if they rely on assertions which are blatantly untrue. It is difficult to listen to people who went Tory in 2010 or recent converts to the SNP without realising this.

As well as tackling political issues which come from our opponents as above, we have to get our own house in order.

Part of this is about getting the politics right in Scotland, but we should not have been as vulnerable to Tory attack in England as we are either. Part of this could be easily cut back by making a principled argument for a federal Britain which also allows some level of acceptable freedom to both left and right leaning areas in England, bringing government to people on a more transparent level as we have done in Scotland and Wales, and drawing out some of the national resentment from a whole range of constitutional debates and scenarios. 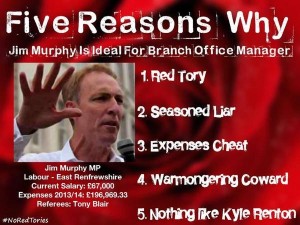 But there is a much deeper common obstacle in both cases.

I would argue that in both England and Scotland, the issue dominates. It is being used to damage Labour by hostile opponents on all flanks, each of whom are immune to it themselves. It makes a lie easier to believe than to challenge.

It is as much to do with culture and appearance as it is to do with policy. And despite years of raging away, it has not been distinctly addressed by any of Labour 3 leaders during that time.